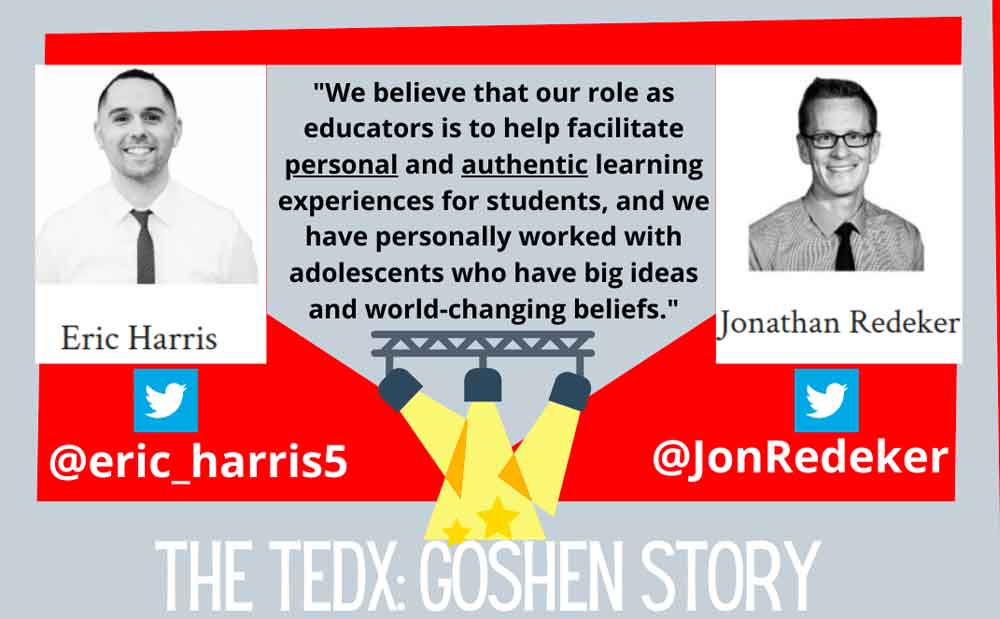 I visited the Goshen (NY) Central School District in the spring of 2019 to watch the Ted Talk these two awesome guys set up in their school district.  I have loved Ted Talks for a log time, and to see one up close and personal was amazing.  It was a great, professional production organized and implemented by Jonathan Redeker and Eric Harris.  Both are educators in the Goshen School District and were kind enough to share their story with me.  If you have never been to a Ted Talk, I highly recommend it and kudos to these gentlemen for bringing it to their school district and community.  You can learn more about their work on twitter @JonRedeker and @eric_harris5. 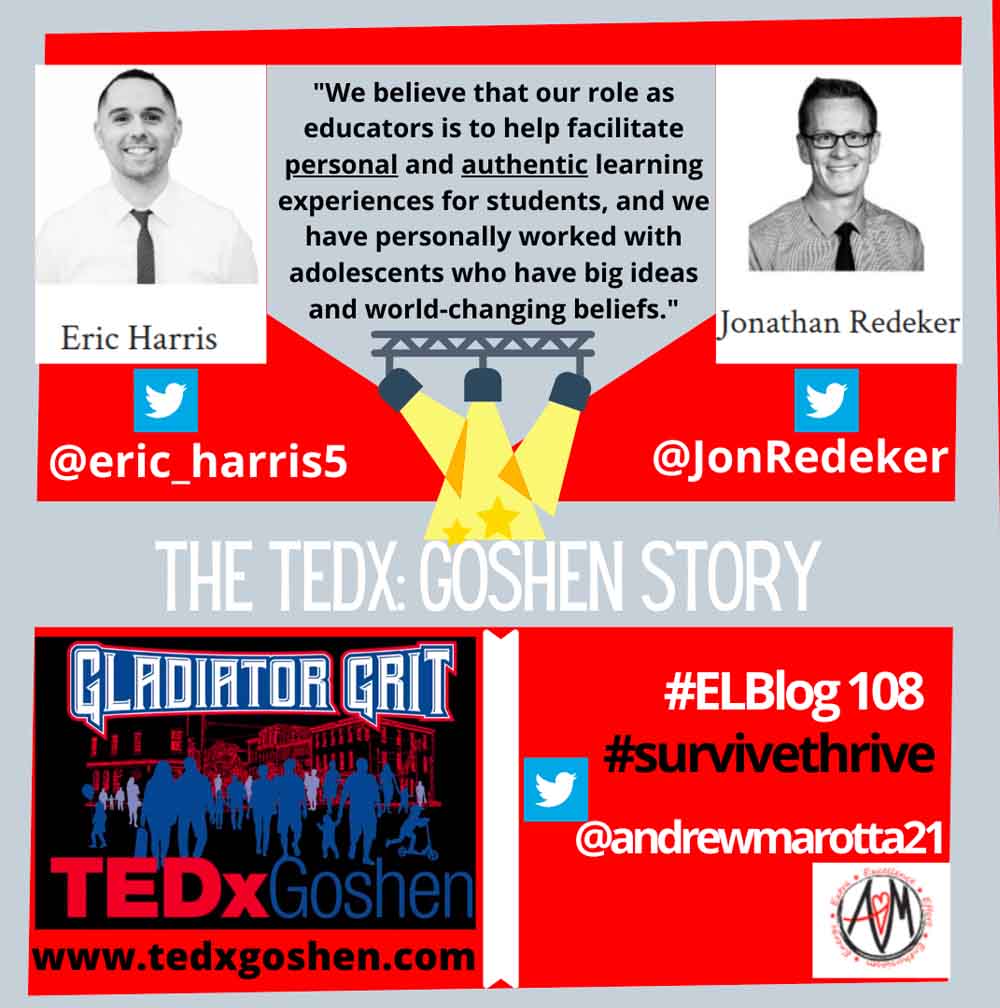 Incredible things can happen when certain people cross paths at certain times.  Thus was the genesis of TEDxGoshen.
We—Jon Redeker and Eric Harris—met in the fall of 2017.  It was obvious our educational philosophies were aligned, but more importantly it was clear that we had parallel ambitions regarding how we wanted to carry out that philosophy.

For years, one of the culminating activities of Eric’s 10th grade English curriculum was something titled “Sophomore Talks.”  At the time, Jon had been running something similar with his seniors in Participation in Government called the “Civic Action Project.”  The tagline for Eric’s project was:  You may not be able to change the world, but you can change the way we all think about the world.  Jon’s was:  Regular people can make social change.

We didn’t know it at the time, but TEDxGoshen would later embody these ideals.  Then, in May of 2018, we engaged in an email exchange with the subject line:  “Time to think big.”  And we were on our way.

TEDxGoshen is a local, independently organized TEDx event in Goshen, New York. Our mission is to re-create the unique experience found at TED at the local level. At its core, the fundamental goal of the organization is to cultivate “ideas worth spreading.” Our aim is to provide a platform where we empower voices in our community to speak to an authentic audience with a global impact.  We held our first event on June 4, 2019, and it was a rousing success.

Our “why” was obvious from the start.  We believe that our role as educators is to help facilitate personal and authentic learning experiences for students, and we have personally worked with adolescents who have big ideas and world-changing beliefs.  It became apparent that we needed to elevate their voices to others. Partnering with the TEDx organization helped give students, alumni, and community members a global voice representing our small town.

We also understood that speakers with profound voices and captivating stories were the heartbeat of this event.  Our speakers ranged from 13 to 55 years old from a wide array of cultural and socio-economic backgrounds.  One speaker, a high school junior, talked about the importance of being present in a digital age; another speaker, a Goshen community member, discussed the power of giving; another speaker, an 8th grader, shared her struggle with people pleasing and staying true to herself; another speaker, a Goshen alumnus, communicated her idea of perseverance through her journey to the United States from Israel and later graduating from Cornell.  You can watch more of these talks at tedxgoshen.com. 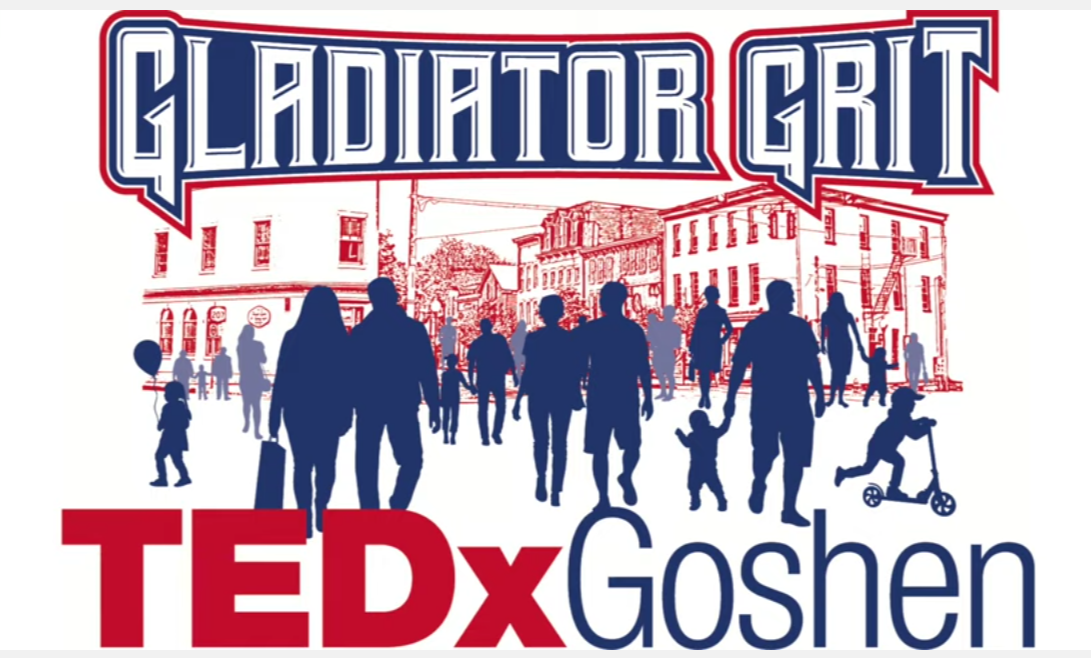 To think we could have succeeded without the help of a strong staff would have been foolish.  Besides, we are not narcissists.  We have always understood, and even preached the value of having building good teams throughout our careers. We are coaches and leaders by nature (Eric coaches varsity basketball and Jon is the instructional technology leader in Goshen), so we understand the value of teamwork. We started as a team of two and quickly realized that we needed to reach out to our larger network to find experts in different areas. As we worked to organize this event, it became apparent that we had incredible talent within our Goshen friends and colleagues.  The event would not have been as successful without the support from the incredible team handling creativity, logistics, A/V, stage production, writing, and performance.

One of the most moving moments in our TEDxGoshen experience was when Jack, a junior from Goshen High School, shared his struggle with the stigma of substance abuse as it related to someone in his immediate family.  In his talk, Jack opened up his heart to the audience as he pinpointed the way so many of us treat addicts who try valiantly to seek help.  Through his personal story, he challenged everyone in the room to be better when it comes to empathizing with those in need of support.  Remember, he was 16 years old.

In truth, most of our speakers rose to the occasion and delivered the best renditions of their talks the night of the event.  When planning for any performance, you hope people peak during the performance. We were overwhelmed with emotion for those who did. Some of our speakers may have stumbled and struggled with some of their talks, but their recoveries and fight to go on were admirable and—to some extent—symbolized the theme of our event:  grit.  Some veteran teachers and administrators mentioned to us that this was “the best event” they have seen in education in their 40 years of experience.  We thought so too.  It was good to hear that our work landed in the community and across the globe with that impact as well. 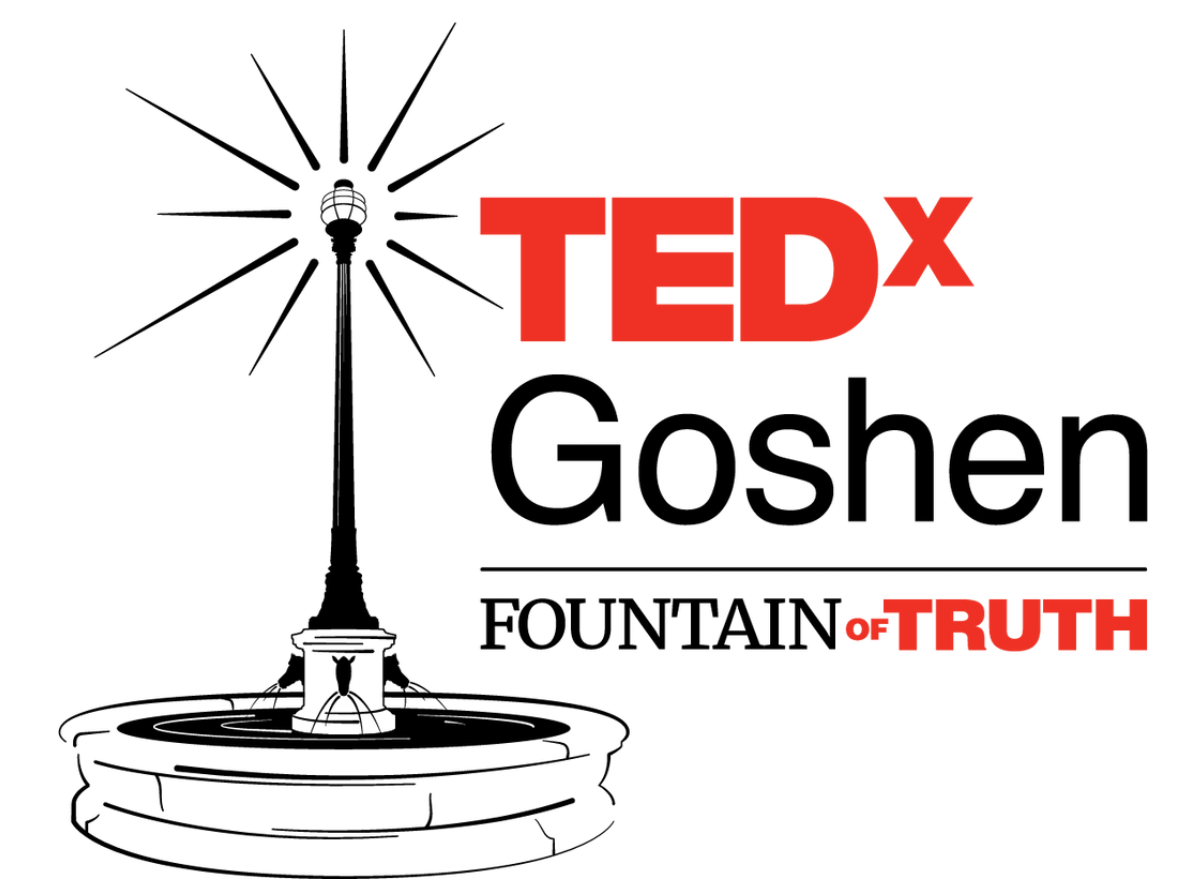 Our 2019 theme:  Goshen, New York finds itself at a metaphorical and literal crossroads. Functioning as the county seat of Orange County, Goshen is a rural town located near the intersection of two major highways. Many people are watching Goshen as it works through the tension as a historical landmark while expanding with new businesses and people.  Goshen is the home of the Cradle of the Trotter and celebrates that heritage at the historical track and museum. Noah Webster, founding father of the American educational system and Webster’s Dictionary is a celebrated member of Goshen’s history.  Meanwhile, Goshen School District is developing modern facilities, teaching practices, technologies and ideas. Goshen is also experiencing corporate growth and investment foreign and challenging to many of the long-time residents.  TEDxGoshen will be a forum for members of the entire community young and old to identify what it means to identify with Goshen.  Living in tension between historical identities while forming new ones in the community takes a certain amount of “grit,” defined by Webster as “unyielding courage in the face of hardship or danger.” The Goshen School District mascot is the Gladiator, which exemplifies much of the character of living in tension.  It is with that in mind that TEDxGoshen will be branded as “Gladiator Grit.”

TEDxGoshen 2020:  TEDxGoshen was planned for the Spring of 2020 but was put on hold due to the COVID-19 Pandemic. Students had begun submitting video promotions of their proposed talks via FlipGrid, and they have been outstanding. 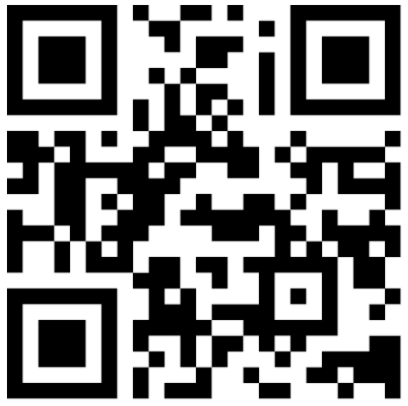