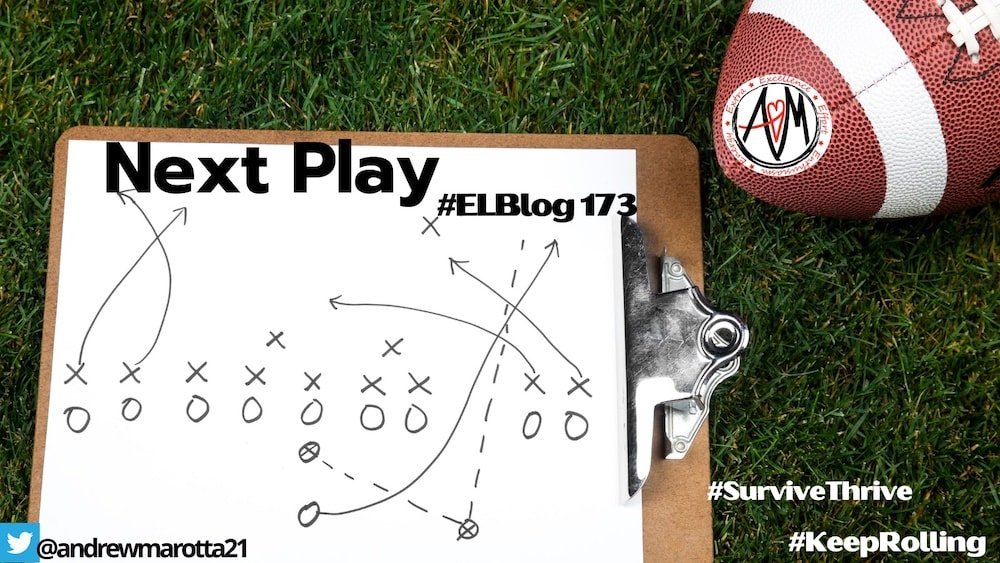 Next play. I love this concept. It’s so simple, yet so powerful. It is the closest cousin to another favorite leadership strategy and mindset of mine the 5SW‘s: sometimes it will, sometimes it won’t, so what, someone’s waiting, so stick with it. I share this concept today with two leadership points around it.

The first concept is that when you make a mistake: next play. Move on. Learn from it. Why did it happen, and what can you do better next time? Don’t dwell on it. As my former assistant principal tells me, don’t be kicking your can down the hall. Move on from the mistake, and get the next play right. Get the next decision right. Get the next interaction with someone right.

The second aspect of the next play is literally what are you doing next? What is your next step? This concept was exemplified during our football season when I enjoy standing on the sidelines. Chris Stellato is our offensive coordinator at Port Jervis HS (NY). Chris is a tremendous educator, guidance counselor, and played college football at the University of Albany. I watch him as the plays are unfolding on the field. Chris has approximately five to seven seconds to decide what play he’s running next for the Raiders. He has his play sheet, the quarterback comes over to him, and Chris is making split-second decisions. Next play. What is he going to run next? Factoring in the time clock, the score of the game, and what just happened on the previous play, Chris makes a quick decision and sends the information to the quarterback confidently.

I love watching this inner interaction unfold during the game. It is a hidden gem within the game. What is your next play? What is your next decision? What are the factors that you are weighing in making those decisions and how quickly do you make them? Procrastination hurts so many. If that was the case in football, the offense of the team would be getting penalties all over the place because they are forced to make a decision because of the play clock ticking down. While we don’t have a play clock in real life, the clock is always ticking for us to take action.
Good luck in your next play and good luck to all of our fall sports athletes starting out there this season. Wishing you a tremendous school year. If I can help you in any way, don’t hesitate to reach out at @andrewmarotta2 (https://twitter.com/andrewmarotta21) 1 on Twitter! #Survivethrive

If you enjoyed this story, and want to learn/hear more, inquire about my Tales from the Hardwood keynote. This talk or workshop is a collection of amazing leadership stories from my time as a Division 1 Men’s Basketball Official. It also is the topic of my next book: Tales from the Hardwood: Surviving & Thriving.
Learn more here: Tales from the Hardwood flyer (https://drive.google.com/file/d/13H2GctQCAZZEEPQeAMwZ8Q_hj8N-rGrf/view?usp=sharing)
Questions? Comments? Click here to contact me. (mailto:andrewmarottallc@gmail.com?subject=%23ELBlog)
Click here to leave a comment on the blog (https://andrewmarotta.com/elblog/)
#LeadershipSparks: Grammy’s Tips

Quote: “Success is not final, failure is not fatal:
it is the courage to continue that counts.”
–Winston Churchill