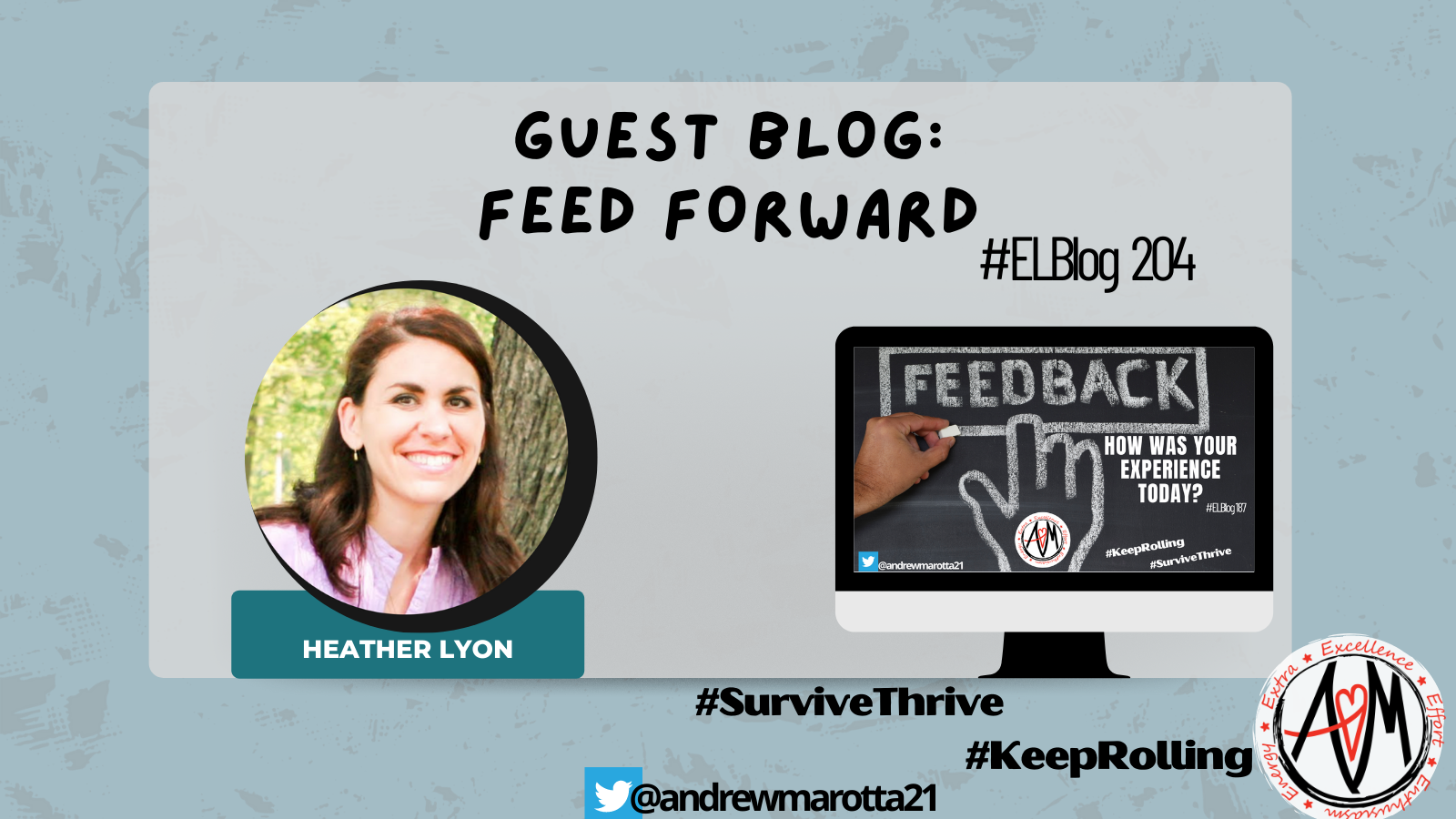 #ELBlog #204:
Guest Blog: Feed-Forward
I love feedback! When people are inspired and moved by a #ELBlog post, I know I hit the mark.

Here is an awesome response from Heather Lyon. Heather is an Assistant Superintendent in the Buffalo, NY area, author, Mom, and more. I love her style of writing as it challenges you to think. Check out Heather’s response to my original blog, “How was your experience today?”

Learn more about Heather and her work here.

In his December 6, 2021, blog post, “Feedback: How Was Your Experience Today,”(which I’ll share on Lyon’s Letters as a guest blog post next week), this week’s Catch of the Week, Andrew Marotta wrote about seeing the custodian in an airport bathroom press his own button on the feedback survey found commonly in airport bathrooms. 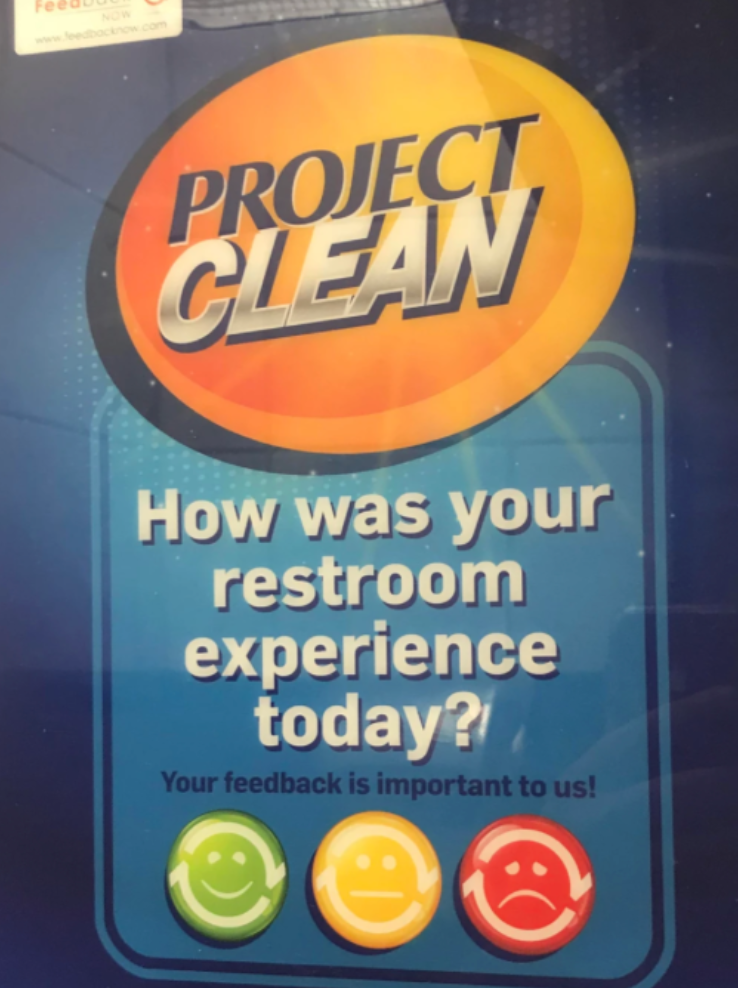 As I walked to my car I reflected on what I had just experienced. The feedback was in the bathroom itself. It was clean, smelled nice, the soap dispensers were all refilled, there were no stains or water spills on the counter, etc. The gentleman obviously had pride in his work, so why did he feel the need to press that button?
This post really got me thinking about when and how feedback works (I strongly encourage you to read the post “What Feedback Is and Isn’t” by Grant Wiggins to learn more about feedback). In fact, I’m still wrestling with these conflicting ideas as I’m sitting here writing now. On one hand, I thought about the mechanism used to give the feedback in the first place (the station with the buttons). On the other hand, I really thought about Marotta’s question, “why did he feel the need to press the button?” I couldn’t help but also wonder about how relationships and integrity might have impacted what Marotta witnessed.

In thinking about the experience of the provider, I can’t help but question who is the audience of the results of the data–the custodian, his boss, or both? I would suspect that it must be both him and his boss since if it was only him, he probably wouldn’t be inclined to press the button since he’d want to know what others think and wouldn’t want to contaminate the waters, so to speak. It would be like wearing a Fitbit and trying to walk in place just to get more steps. I’m not saying that people don’t try to “cheat” the Fitbit; I’m saying that doing so doesn’t make a lot of sense because you’re the only audience of the data.

I also don’t think the data is only for his boss. If it was, the custodian would have no idea what the results were and probably wouldn’t care. My guess is that the cleanliness button data goes to the custodian’s boss first. As such, his boss has no idea who pressed the button, so the more presses and the better the outcomes, the happier his boss is and the better the boss looks at him.

So why would someone press their own button? As Marotta said, the bathroom was clean. Shouldn’t the observable data speak for itself? The hitch here is that the boss is not present to observe the data and relies on the observations of the customers. Thus, I can’t help but think that there is some type of interplay between the custodian and his boss that could cause this type of behavior.

If you’re familiar with Gary Chapman’s work about Love Languages, you know that one of the love languages is “Words of Affirmation.” I can tell you that I am someone who primarily shows my love–both personally and professionally–with words of affirmation. The people around me get written notes or hear me tell them how much I value them and the things they do. Professionally, I do this so regularly that when I meet with people who I supervise, there are never any surprises since I’ve been telling them all along how they’re doing and reinforcing their good work with words of affirmation.

If I was the boss of the custodian I would go to the bathrooms and see with my own eyes how the bathroom looked regularly (Chapman would call this language “Quality Time”) so the custodian would see me and know that I’m there to support him. This way, when looking at the data generated from the pushing of the buttons, I would have first-hand evidence to validate the data OR I would have first-hand evidence to contradict the data if it didn’t align with what I saw. Either way, the button data would not be the only evidence available about the custodian’s work. Put another way, I would need to have multiple points of data and I would be affirming and supporting the work of the custodian throughout (words of affirmation and quality time).

Pressing your own button in this way can feel like the custodian is being non-compliant. After all, the buttons are not there for him to self-assess his work. This makes me think about my Engagement Matrix (see below). As I wrote about in my books, when thinking about engagement, relationships matter. Many people who would be non-compliant will shift to compliance if they have a positive relationship with the person assigning the task. 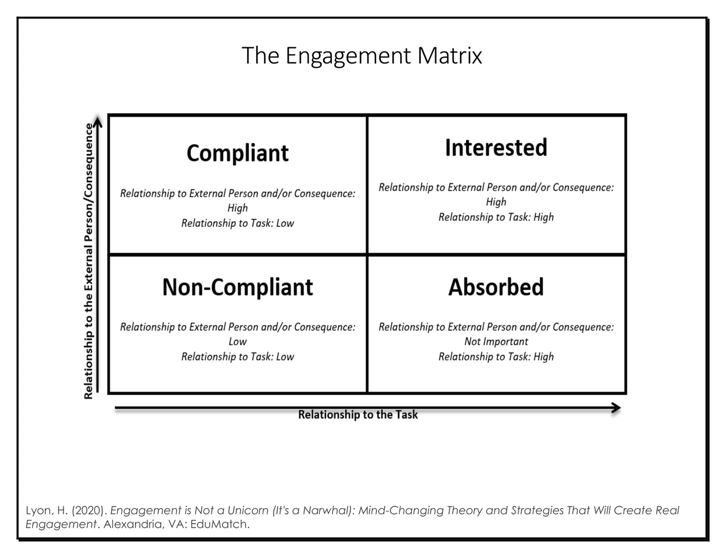 For example, you may not want to go watch the newest Disney cartoon, but if your children asked you to take them, you would. You may not want to take out the trash, but if your grandma asked you to do it, you wouldn’t want to let grandma down, so you do it for grandma. People in charge–be them teachers or administrators–often have to ask the people who they work with to do things that they may not want to do. Having a strong relationship certainly doesn’t hurt when times like those come up. Building relationships through actions like words of affirmation and quality time certainly helps.

Without strong relationships, non-compliant people may find ways to work around the expectations of the task. In this case, the custodian pressed his own buttons to game the system. Someone else who is non-compliant may shirk their work–which could be why the rating station was put in the bathroom in the first place. If the supervisor can’t be there and the non-compliant custodian can’t be trusted to do the work, then perhaps this rating station and the threat of a bad rating is the extrinsic consequence needed to create compliance with keeping the bathroom clean even if the intrinsic consequence of doing a good job wouldn’t be enough. Preferably, rather than the feedback device, a positive relationship with the supervisor might be a healthier motivator for all involved.

The final point that Marotta’s post made me think about was how much I wish that people’s actions were aligned to their internal compass (integrity). I recently watched the episode, “Teenage Brain” on the Netflix show, The Mind Explained. In it, there was research on the concept that even as young children, humans start to feel like they have an invisible audience watching them. As teenagers, the audience feels the largest and most judgemental. As adults, the invisible audience is still there, but not as prominently nor menacingly.

I think adults who are not aligned with their moral compass seek ways to please their invisible audience in visible ways. Doing so means that their decisions are about gaining popularity and making others happy even if those decisions contradict the inner voice of right and wrong.

Marotta asked in his blog,
Do you feel the need to click the green button in your own life or are you already doing a good job?

To me, clicking the green button feels like seeking external validation rather than finding it internally. When you do that, you are saying, “Your assessment of me matters more than my self-assessment.”

My fear is that there are people who are willing to sacrifice their own knowledge of internally gratifying work in order to get someone else to press the green button–even if the people you’re trying to please are not aligned to your values. In this way, the green button stands for “pleasing others” when it should stand for “doing the right thing.” You don’t have to be a genius to know that Einstein was onto something when he said, “What is right is not always popular and what is popular is not always right.” It’s because of this that we should be very careful about trying to make others happy if the cost is our integrity.

After reading Marotta’s blog I sent him this text.

He reached out because he wanted feedback to know what, specifically, I was thinking about. This post is my feedback for him. I’d love to know what feedback you have for me!

P.S. This week’s Catch of the Week is Andrew Marotta. While writing The BIG Book of Engagement Strategies, I posted through social media and my publishers listserv that I was looking for folks who might be interested in contributing a strategy to the book. It was through that request that I was introduced to and became friends with Andrew Marrotta who spends his days as the principal of Port Jervis High School and his remaining professional time writing books like The Principal: Surviving and Thriving, writing a weekly blog, “Educational Leadership and Beyond,” and hosting his “Educational Leadership and Beyond”podcast. I encourage you to check out his books, blog, and podcast!

#LeadershipSparks: What Does Your Logo Represent?

Quote: “Never tell people how to do things. Tell them what to do and they will surprise you with their ingenuity.” – General George Patton