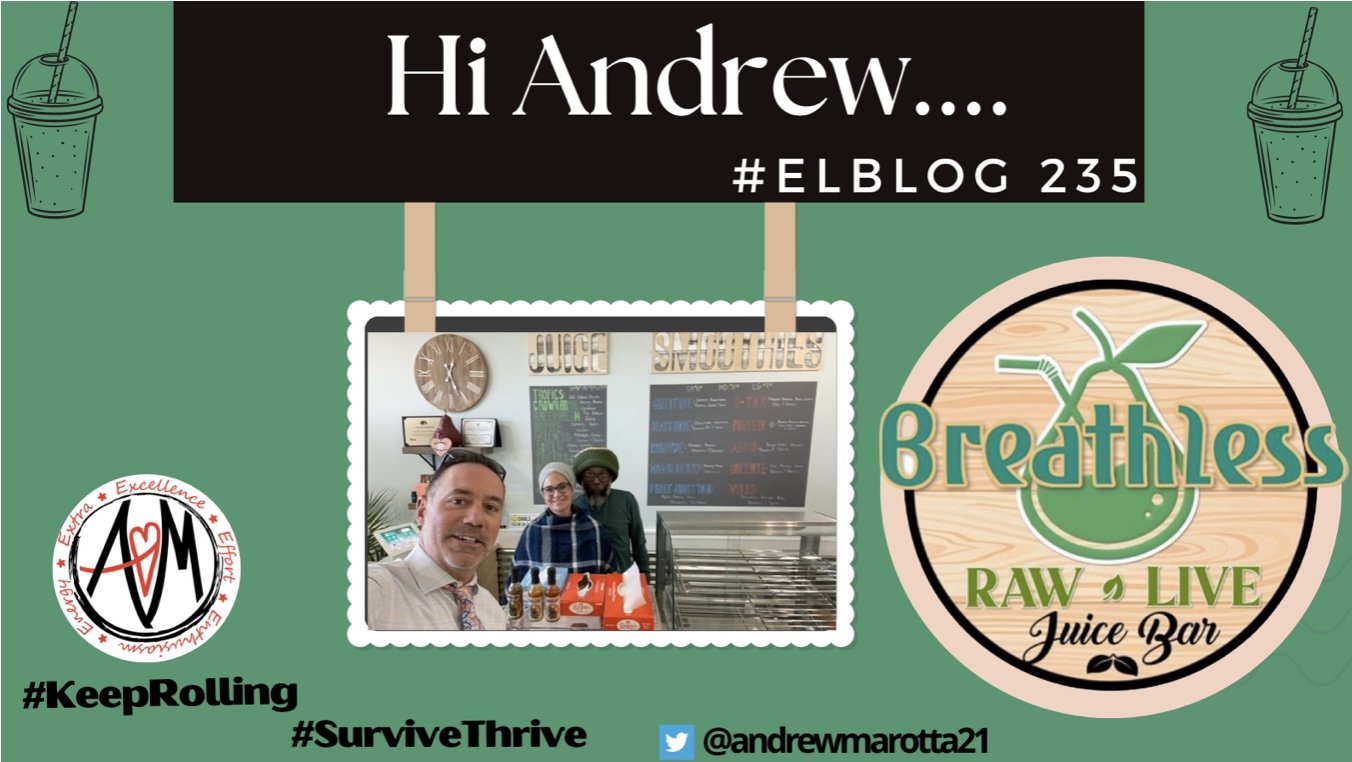 A new juice bar called Breathless Raw Live Juice Bar and Café recently opened near Port Jervis Middle School (NY) where I am Principal at the middle school. The business, and its owners Nick And Dawn, moved from the neighboring community of Milford, Pennsylvania.

I began to hear people talking about how good it was, and how friendly both Dawn and Nick were. I had to stop in and check it out. The juice bar is immaculately designed, and clean, and there’s a friendly vibe everywhere. Both the food and drinks were absolutely delicious as well!

As I paid for my order and signed my credit card receipt Dawn called out “thank you Andrew” as I left. Her calling my name got my attention. I found it personal and inviting.

A few days later I called in an order for pick up. Nick asked for a name, and I gave my name. He repeated it back and said, “thank you Andrew, we’ll see you soon.” When I walked into the Juice Bar for my pick-up, Dawn greeted me warmly, saying “Hi Andrew”, and handed me my order. On the way out. Nick called out from the back of the kitchen area “take care, Andrew!”

When I called again the next time, my number must’ve been in the system and came up on their screen with my name, because when Dawn answered the phone, she said “Hi Andrew!”
This simple act of knowing someone’s name so quickly is very inviting and warm. As a school leader, this is something I focus on with teachers, parents, and most importantly, the kids. Learning their names quickly, and repeating them is something I work very hard at. I think it builds an instant connection when you can say someone’s name to them shortly after meeting them. It shows intentionality, connection, and strong relationship-building skills. Many people think that others can just remember people’s names, but that’s not necessarily the case. I think a lot of people have to work at it, and take the clues that are there in front of them. Just like my name coming up on the caller ID. Whether Nick and Dawn did that or not, it doesn’t matter. The fact that they said my name so warmly and greeted me is all that matters.

Keep rolling friends, and keep greeting those you interact with by their names! If I can help you in any way I don’t hesitate to reach out at @andrewmarotta21 (https://twitter.com/andrewmarotta21) on Twitter.
Questions? Comments? Click here to contact me. (mailto:andrewmarottallc@gmail.com?subject=%23ELBlog)
Click here to leave a comment on the blog (https://andrewmarotta.com/elblog/)
#LeadershipSparks: I Challenge You To Beautify

Quote: “The highest of distinctions is service to others.”
-King George VI

#ELBlog #231: She Flies With Her Own Wings
October 17, 2022
Product Categories
Listen to the Podcast